Decode fever real estate resort Phu Quoc
According to the forecast of Vietnam Capital Partner, 2015-2020 period, investing in real estate resort will increase the attractiveness. In fact, from quarter 2/2015, sea villas are making fever in Vietnam.
Villas projects in prime areas such as Da Nang, Nha Trang and especially Phu Quoc are fast becoming owners after only a short time of sale. What makes Phu Quoc resort fever and whether this fever has peaked?
The potential of Phu Quoc Island
Congress of Kien Giang Party Committee term 2015-2020 in 10/2015 has affirmed to focus on building and developing Phu Quoc according to special economic zone model.
Prior to that, the inauguration of Phu Quoc International Airport in Q4 / 2012 was the launch pad for the exciting development of the Pearl Islands in the coming years.
According to the planning of Kien Giang province, Phu Quoc will be invested to build synchronous transportation infrastructure, improve the quality of human resources and administrative reform to meet development requirements.
In addition, the face of Pearl is changing rapidly with the active investment of Vingroup Group: Vinmec International Hospital, Vinpearl Land entertainment, Vinpearl Safari … has significantly improved the overall infrastructure.
In particular, the Vingroup investment to build international tourist port to Phu Quoc – expected completion in 2017 will make a breakthrough for the development of tourism Pearl Island.
In addition, the $ 4 billion MGM Grand Casino casino adjacent to Vinpearl Resort & Villas will contribute to Phu Quoc’s appeal.
And since Bai Dai – Phu Quoc was voted in the top 10 most beautiful and pristine beaches in the world, the island of jade became an attractive destination for tourists.
At the same time, the visa exemption policy for no more than 30 days for citizens of 68 countries, including Japan, South Korea and some European countries – countries with high numbers of tourists to Vietnam – help stimulating tourism in general and tourism in Phu Quoc in particular.
According to statistics, in 2015, the number of tourists to Phu Quoc increased 57% compared with 2014 with 1-1.2 million, of which foreigners accounted for 35%.
Revenue from tourism in Phu Quoc in 2014 increased by 84% compared to 2013. It is expected that by 2030, the Pearl Islands will welcome 7 million tourists, of which tourists make up a significant portion.
Value added in the future
The sea villa in Phu Quoc is considered to have a landscape on par with sea villas in the countries in the region. For example, the Vingroup Group’s ocean villas were designed by EDSA and FSC (USA) – two of the world’s leading architectural and landscape design units, each with multiple titles and awards. old.
Vinpearl Resort & Villas is currently priced at VND15-20 billion / unit. Vinpearl Resort & Villas villas are priced at VND15-20 billion / unit. Vinpearl Resort & Villas villas are priced at between VND15-20 billion /shallow
Vinpearl Resort & Villas villas are priced at 15-20 billion VND / unit
Phu Quoc Beach is also recognized for its beauty and even better than the famous tourist destinations such as Phuket – Thailand or Bali – Indonesia, as voted by reputable firms in top spots. the most beautiful sea on the planet.
However, the selling price of villas in Phu Quoc is only 1/3 of the selling price of other countries in the region and in the world. This shows the possibility of the price increase of Phu Quoc beach villas in the near future.
Attractive policies of the owner
Recently, the fever of villa resort investment increased when Vingroup Group pledged to share 85% of the profit from the lease of villas and this is the highest on the market today.
Vingroup Group is committed to a minimum profitability of 10% per annum for 10 years to provide peace of mind when investing for clients. This 10% commitment is twice as high as the current bank deposit rate.
Only after 10 years, the investor has recovered all of the initial investment and the interest of a 5-star villa and the regular profit from the commitment to share a lifetime of 85% of rental profits.
If before, when referring to resort villas people think the playground of the giants are now, from only 2 billion VND, a medium investor can also bravely participate thanks to policy Co-owners allow multiple co-owners to purchase and own up to 65% of the villa value from Techcombank.
With what is happening, it can be said, the beach resort villa fever has just started and will also heat up.
Vingroup Corporation is about to launch new resort property Vinpearl Condotel in the beautiful coastal city of Nha Trang in January 2016. Condotel is a form of investment real estate for rent combining luxury apartments and 5 star hotels. 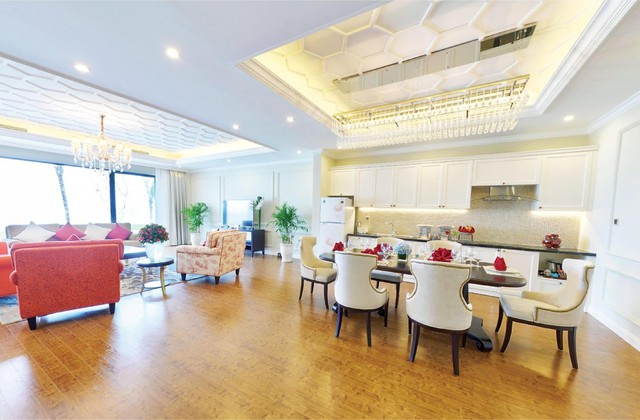